Schedule a free tour today or make a reservation
loading...

The house was constructed by Leo and Dorothy Brom when they returned home to Winona following World War II, and is currently owned by their son Erik and his wife Jodi.

Erik remembers his folks saying they got the idea for the house while they were living in Cleveland and sketched the original design in the sand on the beach.  It appears that they were influenced by Frank Lloyd Wright, and it has many characteristics of the Usonian Style.

The house sits on a portion of Leo’s father’s original farm. Frank Brom bought a farm in the country west of Winona about 1920. He opened the Brom Machine and Foundry Company in 1933. Leo bought the lot immediately west of his parents home. His sister Lillian bought the next lot, and their brother Paul was next. Erik and Jodi live on a lot on the southern portion of the original farm.

Leo and Dorothy did the majority of the construction work themselves.  They built the home in phases—the west (right) kitchen wing was the first part. The cornerstone shows 1946. They moved in and lived in the kitchen end while they constructed the rest. The center living room section was built next, and completed in about 1953. The east bedroom section was completed in 1956. Everything is on a single floor. There is no basement, only a utility crawl space.

The living room section is a single large room, completely clear-span. The side facing 6th street has minimal windows and doors to block the noise from the street. The back, however, is completely glass, floor to ceiling, with four large picture windows and a patio door. Even though the house is now in the middle of the city, the view is of the woods surrounding the house.

There are china cabinets and storage along the kitchen end wall, and that end was typically used as the formal dining room, with a cherry wood table Leo built which seats 10.  The east end was the living room, which featured a hifi music system and an 1869 Chickering square grand piano.

The bedroom end features a master bedroom with large closets, two other bedrooms, the master bathroom, and a storage room.

Leo worked for the Brom Foundry his entire life, and they lived in the house until they both passed away. Erik and Jodi have remodeled the home to modernize all the mechanical systems, and make it suitable for use as a retreat house as well as a single family home. One of the main goals of their renovation project was to retain the original style of the home.

Leo was a prolific photographer, and we have many pictures of the house during construction and shortly after it was completed. Visit our blog, where we have posted construction updates and will continue to share historical tidbits about the building.

Contact us to reserve Goodview Haven—for an afternoon, evening, weekend or more:

Sign up to learn about upcoming events and seasonal specials from Goodview Haven. 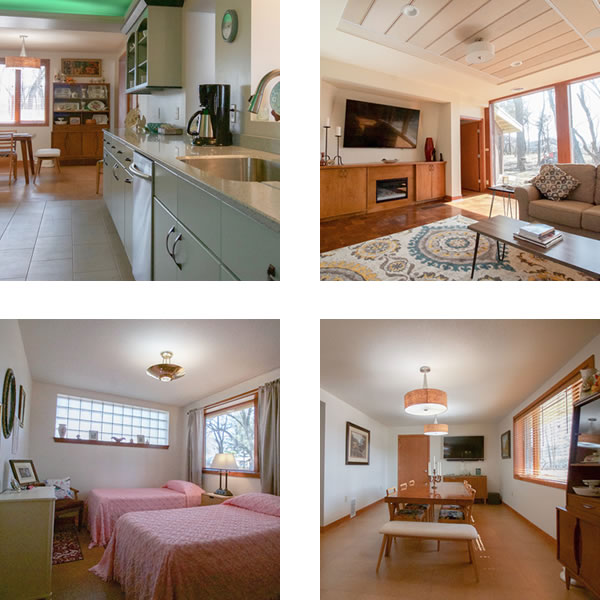 Jodi and Erik thank you so much. Your place is awesome. We only stayed one night but when we come back this way we will definitively stay here. Everything is so clean. We enjoyed all the games and your decorations.